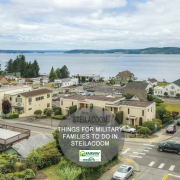 If you’ve recently re-located to Steilacoom, Washington you might be wondering what there is to do in the quaint city. From the small population to local parks, there are many ways for you to enjoy your new town with your family. Here’s what you need to know if you are one of the many military families in Steilacoom, Washington.

Military Families in Steilacoom, Washington: What you Need to Know

Steilacoom, Washington is located on the water in Pierce County and is less than 20 minutes away from JBLM. It has a population of 6,125 and the median age is 40. The median income in Steilacoom is $59,750 and the median home value is $283,800. Almost 27% of residents are Civilian Veterans. If you are one of the many military families in Steilacoom, Washington, you’re likely to run into families much like your own.

Steilacoom has three schools. One of the highest rated schools is Saltar’s Point Elementary which is rated 7 out of 10 on the Great Schools Scale. The school has roughly 401 students. Steilacoom Historical School District rates 8 out of 10 as a district, with Steilacoom high school leading the pack with an 8/10 rating. The student teacher ratio is 23 students/teach, and has 921 students enrolled into the four-year high school.

Here’s what a current resident has to say. “Steilacoom has a very strong sense of community and because of its size, location and the nature of its population seems to have very little crime. People are generally kind and the teachers at the schools handle the children generally very well – kids growing into hardworking students who care about others. There is also a lot of history to be told about it which is shown by all of the plaques and historical buildings around the town. To sum it up, Steilacoom is safe, friendly and quiet.”

You may also like: 5 Things for Military Families to do in Dupont, Washington